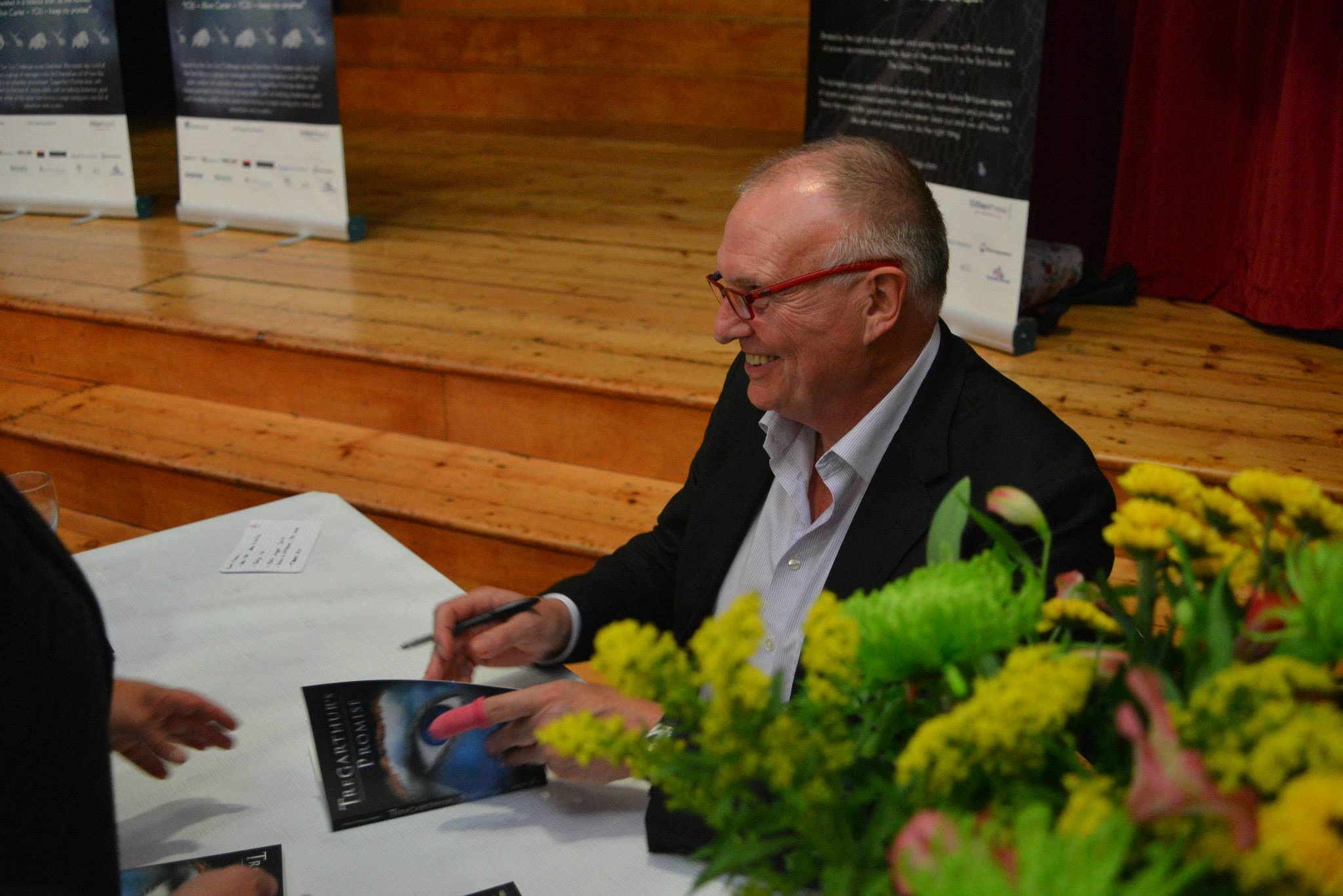 Alex Mellanby would claim that failure to pay a previous GMC registration was not necessarily a bad thing for humanity!

Previously, as a doctor, he had experience across many different fields of medicine with research papers published on school health education and infectious disease prevention. This all changed when an unexpected stroke forced him to hand in his stethoscope and swap it out for a notebook to embark into a successful new writing career. He developed a draft version of the Tregarthur’s Series and submitted it to the Times Chicken House competition. It gained genuine interest which inspired him to later iron out many technical issues. He completed an MA in creative writing at the Anglia Ruskin University, Cambridge, and having made endless refinements the first book in the series was published by Cillian Press. Having quickly gained a strong band of fans with his series of teenage fiction books, he has given up any pretence of doctoring except to over-diagnose his own hypochondriacal illnesses. The Tregarthur’s Series series was inspired by the timeless nature of walks on Dartmoor. His latest novel is Not Forever (Matador). Alex currently lives just outside Cambridge, UK.

The Tregarthur’s Series, was inspired by the Ten Tors Challenge, a two day annual event organised by the Army, for 2,400 teenagers to visit ten tors across Dartmoor, UK. A modern day Lord of the Flies, the books follow a group of teenagers who find themselves cut off from the adult world in an unfamiliar environment.

It's an adventurous five-book young adult fiction series about survival and self discovery. Inspired by the dark timelessness and unpredictable vast landscape of Dartmoor National Park in Southern England, a group of school children on a hiking expedition unleash an unknown power, transporting them through time, to a world beyond anything they have experienced. Cut off from the adult world in unfamiliar environments, the series chronicles their adventures as they desperately try to return home.

Each book in the series involves travel to a different time, where the group has to survive using skills and knowledge they have gained from their old life. On a journey from the prehistoric age of the Neanderthals to the 14th century Black Death; from the Convict ships of the 18th century to the more recent discoveries of Marie Curie, the group are drawn back to the strange stones of Dartmoor.

In the final book, Tregarthur’s Legacy, the remaining members of the group are caught up in a never ending war that is raging across a WWI stricken France. In this explosion of past events, Mellanby has yet again delivered a powerful story with themes pertinent to young adults intertwined with mystery, historical fact and adventure that has delighted his growing readership.

Can Alvin and Jenna survive? Will they save their companions? Why does Alice Tregarthur want them all to die? Is this just about her or is there a larger force involved, something dark and timeless from the moor?

Books in Tregarthur's Series  - In a row

Books in Tregarthur's Series  - In a row

* Get all books in the series here for ONLY £19.95 (regular price £39.95).
This offer is NOT applicable at other online outlets.
This is a LIMITED special offer.

This limited special offer also includes a digital eBook copy of each title in this series - absolutely FREE.
You will receive an email with links to each eBook once ordered.

A modern day Lord of the Flies, the books follow a group of teenagers who find themselves cut off from the adult world in an unfamiliar environment. It deals with themes pertinent to the lives of young adults, such as bullying, leadership, grief, and friendship, whilst at the same time having a page turning story line full of adventure and mystery.

A school hiking expedition is hijacked by Miss Tregarthur, driven by her dreadful Promise. Her plan unravels when she is injured and the hikers find themselves alone and transported to a time before history. Alvin and Jenna lead the fight to survive and battle with the vicious bully Zach and his followers. Disease, death and disaster follow them as they try to decipher the Promise and search for the way back home. But Miss Tregarthur has not played her last game.
Click toAdd to Cart

After escaping their troubles at home, Alvin and Jenna believed they were safe. They hadn’t counted on the return of Zach, ex-school bully turned murderer and his caveman army. Forced through the tunnel they find themselves back on Dartmoor – except that this is definitely not the 21st century.

Struggling to understand the mysteries of the tunnel will they ever return to a safe time and place? Alvin failed to keep Miss Tregarthur’s promise. Now reaching across time, it seems Miss Tregarthur will have her revenge.

In 18th century Britain sheep rustling was punishable by hanging or deportation. Neither seem a good alternative to Alvin, who is still trying to work out how he and his friends got caught up in this mess. In Tregarthur’s Prisoners they may be getting closer to present day but they are further from Dartmoor than they’ve ever been before.

Tumbling through the twists of time, can Alvin escape the hangman’s noose? But as Miss Tregarthur tries to destroy them all, the tunnel is beginning to give up its secrets.

Trapped in the wrong time, Alvin and Jenna’s only hope lies with Miss Tregarthur’s crystal. But can they follow her in an age of horses and steam trains?

Even if they do find her, the crystal is failing and the answers may not be close to home. As they start to uncover the full horror of Miss Tregarthur’s mind they realise how far she will go to control time. Will Alvin escape the future she has planned?

By the same author

After a childhood of secrets and danger, Molly's revenge is just the beginning...

Molly’s childhood is a world of secrets and hiding. Her life is spent escaping from danger with her mother. This time they leave London at night with a supposed offer of a house in Devon.

Lester’s house is more of a squat. He is a truly disgusting and violent man. Molly’s mother is held by the mixture of available drugs and a need to be wanted. Molly believes their lives are in danger if they try to escape.

Outside the run-down house, Molly discovers Dartmoor. The fantastic bleak wilderness is an unbelievable space for a young girl who knows only towns and dark alleys. Molly steals her times on the moor while Lester plots.

But when things go badly wrong for her mother, Molly seeks revenge and that’s when Police, Ambulance, Fire, and Court Services arrive.

And that is just the beginning.